MyNotex is a free software for GNU/Linux to take notes, to file documents and to manage activities. Notes are gathered under different subjects and are made by a title, a date, a tags (keywords) list and a free-length text. This may be formatted: it is possible to change the font name, size and color of a selected text and of its background, and also to set bold, italic, underline and strike-through; the text may have pictures within it. The software can manage paragraph alignment, bullets, numbered and alphabetic lists with automatic indentation. Each note may have any number of attachments (files of every kind), and has also a spreadsheet-like grid to manage a list of activities which is quite similar to the one used in many software of project management. The various activities of one or all the notes of a file may be shown in a diary view and possibly exported in iCal format. A single file of MyNotex contains various notes filed under different subjects. 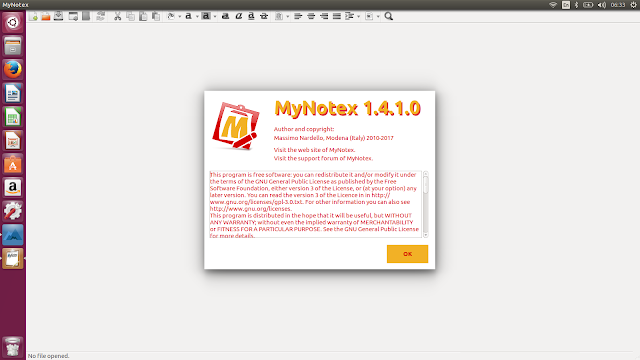 The GetDeb repository contains the latest packages of MyNotex, available for Ubuntu 16.04,  Ubuntu 17.04 and derivatives.

1. Add the GetDeb repository via command:


For Linux Mint 18.x, replace $(lsb_release -sc) directly with xenial in the command. Type in your password when prompts and hit Enter.


(Optional) To remove MyNotex, use command: