qBittorrent is a free, open-source and reliable P2P BitTorrent client, available for Linux, FreeBSD, Mac OS X and Windows. It aims to provide a free software alternative to uTorrent. 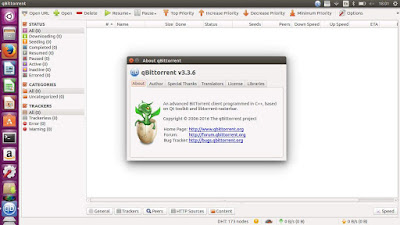 qBittorrent v3.3.6 was released. Minor bugfixes of v3.3.5. It also fixes crashes on launch for some Windows setups. It is a libtorrent problem. On Windows it uses libtorrent 1.0.9+git f716aef5 with commit 45cff5837f7b4af reverted as this one is causing the crashes. Investigation is ongoing. Mac OS X builds are ready too. Ubuntu PPA will follow.

We can add this PPA to Ubuntu Operating  Systems and install qBittorrent with few easy commands.

Email ThisBlogThis!Share to TwitterShare to FacebookShare to Pinterest
ป้ายกำกับ: Internet